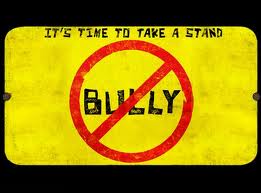 Last year I wrote a post about the movie Bully, a powerful documentary that followed the lives of several kids, families, schools, and communities who were effected by bullying and harassment.  A year later, you are left wondering how the people involved are doing and how their lives may have changed as a result of the movie.  Recently, a follow-up documentary called The Bully Effect, produced for Anderson Cooper 360 on CNN, has been airing (check local listings, On-Demand, and other television video services for viewing opportunities).  This piece follows up on most of the stories and people shown in the original documentary:


Overall, this new documentary conveys a message of hope for the kids and families in the original movie, and aims to show just how powerful an effect the film has had on kids, schools, and communities across the nation.  Alex, a child who was physically assaulted on a daily basis in his school and on the school bus, now has many friends and has turned into a powerful advocate and speaker against bullying across the country.  The father of Ty, a young man who committed suicide, has also turned into an anti-bullying speaker whose mission is to reach as many schools and kids as possible with his message.  Kelby, a young woman who was harassed and bullied because of her sexual orientation, has been in a relationship for three years and has the continued love and support of her family.

All is not right with the world, however.  I was most concerned with the fact that, although Alex is doing extremely well, his family had to move into another school district in order to insure the safety of their children after his sister was assaulted on the playground of the same middle-school that Alex had attended.  The administrator who the family had sought out for support but who had done little, at least as portrayed in the context of the original film, has not only remained in the school district but was promoted to being a principal of a local elementary school.  Kelby has the support of her girlfriend and her family, but eventually the decision was made for her to drop out of high-school and get her GED after she was allegedly run down by a car close to school grounds with the intention to injure her based on her sexual orientation.  This continues to demonstrate that anti-LGBT bullying and harassment not only impact students socially and emotionally, but also academically.

The message to me from this follow-up documentary: advocacy is still needed, and we still have work to do.  Even after the national spotlight had been shown on Alex and Kelby's schools, the bullying and harassment continued to the point that they both had to leave not only in order to thrive, but in order to be safe.  Further, while they are now in places where they can be begin to move ahead with their lives, I wonder about the many other kids who are still in those schools and communities--if nothing has changed within those school cultures with regards to bullying and harassment, are they doomed to encounter the same hostilities, the same assaults, the same threats as Alex and Kelby?  If kids do not have even the basic need of safety being met at their school, how can we expect them to learn?  How can we expect them to achieve?  How can we expect them to move into meaningful post-secondary programs?  Indeed, the "Bully" effect has been huge as the stories of the children and families portrayed have made their way into hearts and minds across the country.  However, what seems amiss is that it has not yet made its way into some of the schools of the very kids who continue to inspire anti-bullying policies and conversations to this day.

School Counselors: Advocacy needed, and we still have work to do.
Posted by Darrell Sampson, MA, LPC, NCC at 11:09 AM

Darrell Sampson, MA, LPC, NCC
Darrell serves as a student services and school counseling curriculum administrator in Northern Virginia. Darrell has written articles for American School Counselor Association (ASCA) publications, has presented at national, state, and local professional development conferences, has served on the elected board of the Virginia School Counselor Association, and has been a RAMP reviewer for ASCA. Darrell holds degrees, certificates, and endorsements from the University of Virginia, the George Washington University, the University of Oklahoma, Millikin University in Illinois, and is currently a doctoral candidate at the University of Illinois at Urbana-Champaign. Additionally, he is licensed as a Licensed Professional Counselor (LPC) in the Commonwealth of Virginia. Darrell's core expertise includes secondary school counseling and leadership, LGBT issues, grief and loss, and life-transitions. In his other life, Darrell enjoys singing, yoga, hiking, travel, good books, and good coffee.